So, first things, first. I love Seinfeld (and Friends and Buffy…) and use quotes from those shows daily. So my thoughts yesterday in my dressage lesson was what DO I want? and my answer was THIS, THAT and THE OTHER (From Seinfeld episode, the Deal if you are following along). My issue of course is not about a relationship in that way but in another relationship i.e. between me and my horse.

We had a lesson (finally) with Emily (Not Emily’s fault, my work schedule/ life fault). I rode on Sunday in our ring at the barn and Remus was….not great. He was bucking into the departure of the right lead (his good way) and WOULD not canter the left way (his bad way). I worked him some more on some stretchy trot and circles and called it a day thinking Emily can straighten him and ME out (She did).

I warned Emily that we had some issues in the canter. We started our lesson with some nice trot work. Remus has two distinct directions and needs. Trotting to the left, I have to keep him on a bend so I can see his nose on the inside, otherwise he pokes his shoulder out and just is rude with his nose to the outside. To the right, I have to think totally differently and use my outside rein constantly, give with inside rein and constantly play with his mouth to get him to NOT bend too much. Horse you make me think WAY too hard. Plus more forward please horse!

We got some actually decent circle work out of him (full disclaimer, my circles…um suck?? (More bend, more circle is usually written on our dressage tests as well as needs bigger circle). Yeah geometry is NOT my friend (See, think too hard).

But it was okay in the lesson. Then Emily said, let’s try this, let’s trot the right way to B then do a teardrop back to M and ask for the canter. And I cannot draw a straight line but it is okay cause this is how we do it in real life (all wonky)! 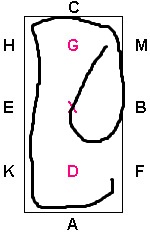 Big sigh. But as I leg yielded over toward M the big idea was to ask Remus to canter there. As in busy brain, he won’t fight, right? Ummm…Yeah. I wish I had media. I SO wish I had media. Because he would NOT canter with me that way. And he bucked. And bucked. (He really can’t buck well, but he got a few kicks in that made me a tad bit worried). SO Emily said can I get on him(and my usual answer is per normal, OMFG YES PLEASE).

And my first thought was watch him go right into it for her.  HA. He did not. (Is it slightly evil that I feel vindicated that he was a jerk to her too? I do, so sue me). Usually, she can get him to do things that make him look like he came from the Vienna Spanish Riding School (he obviously did NOT). Actually he looked darn together at the trot with her and he does a very pretty trot with her HE never does with me.

And he is not as graceful as said horse above. And she was sitting on him as he did the airs above the ground. I give Emily Donaldson credit. She does not put up with shit. Seriously. She (very nicely I might add) asked him to move off her leg, he gave her the middle finger, and she asked it again, he still gave her the bird and then she gave him the whip and then he bucked. (rinse, repeat, you get the picture (WILL NEVER EVER LEAVE MY PHONE IN THE TRUCK AGAIN, huge wasted media opportunity = newbie blogger me!). And when she did finally get him to canter, he would buck up in the air and swap leads in the back. Or front or whatever he felt. And it dawned on me that this horse does have his changes. (another blog topic maybe?). Because damn it, I am tired of doing simple changes. HA.

She got him cantering and moving forward (almost in a hand gallop around the arena, slowed him down, collected him and trotted and tried again). Same thing, up with Butt, swap legs, be an ass, then canter.  I was sweating watching (and also holding a Blue Tick Coonhound puppy who wanted to play hard while i was watching so maybe I would not have gotten any media, shrug).

I also felt like this watching the excitement(see below). I was thinking she is going to get off my horse, hand his reins to me, and tell me to begone with me and said buckskin, and never darken her doorway again. She didn’t (and I love her for it). 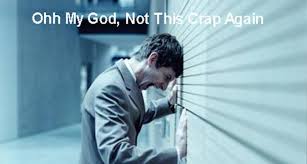 So she finally finishes, he is sweating hard, I am exhausted watching and she says okay let’s see if you can do it. I almost handed her the dog and ran out of the arena screaming without my horse. I realized about 10 minutes into this fiasco that she was going to expect me to do this next. Um…okay?? (I actually wimped out early on and removed my spurs because that can cause Remus to buck harder, but I had a whip, if I could just ball up and use it).

I went and mounted up again and Remus was all like…man aren’t we done yet. Buddy, you did this to yourself. So we started on a circle and I got him trotting nicely again and we started doing canter departures on the bend. I was like a 7-year-old on her first pony: trot, trot, trotting into the canter. A few times he winged up and threw his butt up high in the air, but Luc Childeric dressage saddle you did not give up on me, your duct tape-like abilities kept me in the saddle. WHEW. We DID get it with less fanfare so either he was tired or he gave up or whatever!

He still tried but we did get it. And Emily each time would say sit up, shoulders back, and trot on, and I would think yay, we are done and then she would say one more time. And after about ten more one more times we got to quit (I think I had tears in my eyes by then, I was EXHAUSTED).

So while I was walking him around, we talked that maybe he is sore a bit in his rear end area (legs, butt, stifle who knows). As I pointed out though it would have been less taxing to I don’t know REMUS do the work than buck and cause anarchy in the ranks. Or maybe he was just having a crap week (One more day in a gorgeous grassy field and I am going to lose it, said Remus. Wait no maybe not)

One thing she pointed out was the noseband on his gorgeous Eponia bridle could be a bit tighter AND we had his loose ring snaffle on and he would set his jaw every time like clockwork, so back to the Baucher he goes. (still love that bridle no matter, it cleans up great every time even after he sweats all over it!). He usually is very honest while riding and on the ground, but every once in a while something crawls up his butt and he acts out. I hope that it crawls out and goes to Texas or somewhere else! SOON!

Oh yeah, I have a dressage test at 8 something on Saturday a.m. that I will have to canter him in. Oh my. I really thought about cancelling. Maybe I still will though Emily wants me to go. THANK GOODNESS I did not sign up for Fair Hill.

Meanwhile, because he is still the cutest (even if he is evil), I leave you with this image of Remus pawing. He was doing it every five seconds but every time I tried to video it, he stopped and was like who me? Bad pony (truly bad pony) but for some reason I still love him.

7 thoughts on “This, That, and The Other: Remus Being Bad”