And here we goooooo…. as we trotted/walked/loped up to the Stadium, we helped a couple people get their horses through the water (thank goodness my horse doesn’t care about water!!). It was shady on part of the hike up there so we got a few minutes of coolness before being blasted by the humidity as we came out of the woods and down by the lower end of the CC Course. Then a quick lope up the hill to the stadium area. Warm up complete. LOL I literally jumped a cross rail for the warm up. Yes I should of done more but Remus was already sweating buckets and it was a zoo up there.  I had a bit of a wait so chatted with Emma and Alli and got my gloves back from Tanya and just tried not to vomit on anyone or drip sweat into my eyes. Thanks Jess for the Gatorade, it was GREATLY appreciated at that moment in time!

Even typing this a few days later, my butterflies start up in my stomach. WTF person. Get a grip! ANYWAY, Alli went first and did a lovely round but got a rail at the last jump. IF I had been in my right mind I would have paid attention to that last line but remember, not thinking!! UGH.

It was our time and we entered the ring. The course was really open so I knew there was plenty of room to stretch out and meander our way around (we don’t canter, we lope). And Alli is right, it is SO cool when they announce you and your horse. Love hearing on her Quarter Horse Remus. Really gets you going!  Which is what we needed. TO GET GOING.

Off we went. Honestly, spoiler here: I got two rails (so 8 faults).  On the last two fences. I was SO disappointed in myself that I didn’t take credit for the fact that it was a REALLY nice course Remus did. I didn’t watch the video (THANK YOU TANYA for filming it on my phone no less!) till the next day but I was like. Wow, we are finally getting it together. Do we have stuff to work on. YES but that was NOT a bad course! At all. And I don’t ever post stadium videos but didn’t think this one was worth hiding! HA so enjoy!

Rails, schmails. I should have been thrilled when I came out of the ring. Cause he went over everything and jumped most well. And the rails. Well that line rode funky. And remember when I said I should have paid attention to Dino’s ride? MY FAULT. Not Remus. He gave his all. So proud of my fat, little buckskin carrying my ass around! 🙂 Anyway. He was cute as can be. And hot. Poor guy. But he did it well considering.

So we got done and I beat myself up for a few minutes about the rails and then also caught my breath. Alli waited to watch then was heading to CC so I followed behind her. She was one ahead of me all day since she was 122 and 123 so I just followed like a puppy:).

I learned from Fair Hill before that if you walk up near the start box right after stadium they will want to send you out. I also learned Remus needs (AND ME) some recovery time. So I walked a bit around the warmup jumps while Alli schooled Dino. Then I popped over the elementary one just so Remus knew it was fun stuff time. Then I walked some more. No reason to burn all the gas before you even start the trip. Conservation was our key word of the day.

Alli was off like a Champ. I was still walking Remus  then I meandered over toward the start box The guy with a very cool accent asked if I was ready and I was like I guess so. (I am such a decision maker right?). I had a minute between Alli and me so I continued to walk and then walked into the start box and then walked out when he said GO HA my horse is so NOT a hot head And we were off at a trot and onward to our first jump which was an easy log.

Remus was not perky but he did perk up when he saw the course. He loves CC! The first few jumps were fine but Fence 4 was looming (Hay bale on side) and I knew he was going to look. Not only that but the jump judges were not far out that way too so he had two things to look at. He did look and thought about stopping but he didn’t stop. HOWEVER, he clunked both his front legs on the teeny box (NOT paying attention too busy looking at everything else). He rapped it hard but was fine and kept going. I actually thought for a second shit I hope he didn’t hurt himself But he was just ready to go so I turned to the log by the bank. No issues at all.

This time I was actually breathing too so the jumps were easier (See last week’s Derby). down the hill to the hay feeder (which I fell off last year at) and whee over we went…heading to the RED TABLE OF DOOM. Which as I said for some reason DOES not bother me anymore. We took it fine and that was where my army of friends were so I got video of it and screenshots a plenty:) GO REMUS GO! 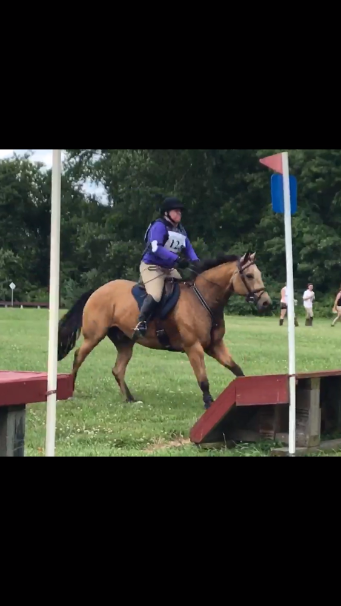 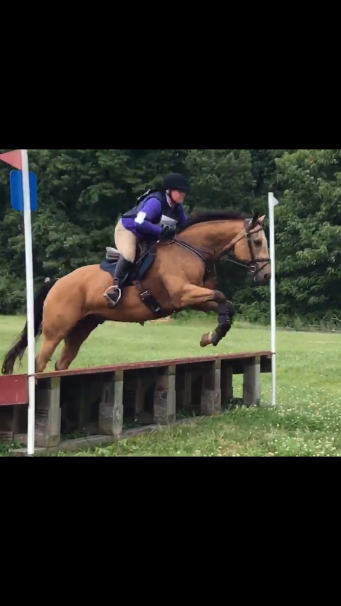 Love the first photo as Remus approaches (ears up, baby!), then he locks on then in the second photo then, BAM we got this, in the last photo!! Writing this blog post just makes me love him even more! What a guy. He sat in a field for 5 years in his early life just eating grass. While he may like that more if you asked him, doesn’t it look like he enjoys this SHIT a lot! Even when it is hot as fire!  But we still had more jumps to go. Whew.

We went through the woods (where Charlie showed us his racing speed, we have none of that thank you VERY much) and toward the next line of jumps. No issues at any. Then we turned to the water, which I know would be no issue. It was not. He trotted through the water and even jumped the logs so much better than last week at the Derby. He was definitely getting tired and I had tried to make him trot a few times. He was telling me he was having NONE of this trot stuff.

We went over the bales and then down to the ditch where I told myself to look the EFF UP (And I did) and over we went no hesitation like last week at the Derby. Then to the little box (which he always comes in close at, need to work that one) but no issues. Then up to the log on the hill. WTF. This thing looks like a monster and it is fence 14 out of 15. MY BOY was tired. I made him trot (FINALLY) and we literally trotted up and over it at a snail’s pace.  If you listen you can hear me talking him over. HA he had never done that before but he was willing, albeit slow! Over it we went, and down the hill, and toward the train. The video cracks me up. I swatted him behind my leg with my hand to get him moving as  I didn’t want to use the bat I just wanted him to finish good over the train.  It worked!!

He was freaking awesome. In the video you can see me just patting him right after the train over and over again.  I was so stinking pleased with him. AND WE WERE DONE OUR FIRST TRIAL OF THE YEAR!! WHEW! Of course I wanted to watch at least part of Emma’s course so I made the executive decision to get off my poor exhausted horse and go by the hill and stand in the shade and wait for Charlie. We talked to a few bike riders who had seen Remus come up the path and STAYED to watch his cc they liked him so much. Another really nice person on a Cream Draft cross And some other people stopped to chat. Remus proceeded to snooze as I loosened everything on him, committing myself to having to LEAD him up the trail back to the trailers. (see the 28k steps I got LOL).

We waited and saw Charlie go by in a flash, then watched him school the water then go the correct way and pop up over the jump and watched him finish like the great horse he is over the rest of the jumps to the finish line. I may have yelled as Emma said. It was so great to watch him go. I wish Dino hadn’t been right ahead of me so I could have watched him go!

Alli had come up to me and I said I was going to walk Remus back. She was waiting for Emma but we all ended up back at the trailers at the same time (Slow, TIRED, QH remember?). It was such a fantastic day!! I enjoyed being with friends (old and new) and just having a great time with my horse. He really was amazing. Are we going to ever go rated or even BN? Not likely. But we have fun and we have people who love him. So I am fine with that!

We ended up 7th but I didn’t even grab my ribbon. I was on my way back with Remus while that storm was hitting.  We were so lucky it didn’t hit us while we were still competing.  And that is a wrap!! What a day!!