Starbar and Jess PLUS lots of Emma and Charlie!

I was hauling a barn friend and her cute paint pony Starbar to Fair Hill. I wanted to go and watch and I figured I would have fun spectating for once and not wanting to vomit in the bushes waiting for my times to ride. So none of that was happening so that was a good day for me too!

Star is this cute as stink paint pony. Jess his owner is a great horse person and fun to be around so i knew I would get along hauling her just fine.  We loaded up around 10 and headed over to Fair Hill (I texted her on the way to the barn as it started raining as in WTF). This rain happened over and over and over again that day. SIGH. (FAIR HILL I KNOW!)

First things first, my barn mates made us STAR Hats! We were TEAM STAR THAT DAY (and I never say NO to free baseball hats!)

Star loaded right up in my big ass trailer (Seriously the thing is Taj Mahal to most horses it is so spacious). He had a fat haynet tied up and was set up pretty good. I was kind of glad we only took him as I could see Remus getting attached and then screaming for Star all day long so this was less stress too.

We got to Fair Hill and there were a LOT of trailers there. And it was still raining. And it was COLD. I had on a bunch of clothes but ended up putting my raincoat over everything and wearing it all day and I was never ever warm again. It was windy and cold all day with a dash of rain and wet too.  We left Star in the trailer and went and signed up.

As I pulled into that sea of trailers what did my wandering eye spy but a white Cotner Trailer and a white pickup truck with Maryland tags. AHA! Stalker alert. I knew that was Emma and Charlie’s rig (Fraidy Cat Eventing) so I meandered my way over and parked behind them. (yes #internetstalkerforthewin).

As we went to sign in, I stopped quickly (Charlie and Bella were in the trailer and intro’d myself to those two great lovely horses) no people were around so I  took a quick snap in case I never ran into Emma I could prove I was there….(I did run into Emma later)….

We ran into our friend Tanya (quick sidebar, eventing is very incestuous as everyone KNOWS everyone. It was like 6 degree of separation as everyone realized we all kind of knew each other from somewhere! HA that was amusing all day long). She and Jess were both worried about some of the Cross Country Intro course but first we had DRESSAGE TO DO (I didn’t, YAY!).

The rain started in earnest during dressage for Jess. Starbar has a tendency to shake his head a bit and we just thought the rain would make it worse but he was pretty darn good for a cold, windy, rainy test.

Walking back to the trailer, I spied a group of people sitting under a shade set up by a big rig like 2 trailers over from Emma, I did a slow scan hoping I would recognize her. I think we both recognized each other at the same time. These people know how to set up for a show! As Emma said we didn’t get a photo with each other but the day it was very very busy. It was great to see her again and great to meet Brita and some others. And there was the cutest NSH in the world in the trailer with Charlie at one point that I really was thinking i had room in my trailer to take him home.

NO ONE would notice right?? But then I thought…hmmm and decided NOT to steal him. Hey who knew I had scruples (or lack of ambition to be hung)!

ANYWAY, back to the competition, EVERYONE was showing at different times. OMG. I needed a spreadsheet to keep track. Jess’s times were near Tanya’s but Emma was later, lets not even DISCUSS THE JUMPING till next post. It was nuts.

I got to see Emma’s dressage only thru the kindness of Jess who had driven her SUV behind me in the trailer and tossed me the keys as she went up to show jump and cc. She was like meet me up there, don’t walk. I didn’t, I DROVE. (I still did over 15k steps that day, even driving, it was a lot of back and forths).

SO I got to stalk (I mean watch) Emma and Charlie warm up. Guys, she has such patience and fortitude with Charlie. I am a MESS warming up (I am hoping I learned from her, the wise one): She walked him for days (Okay not that long) then she trotted big loops and circled, reversed etc. Then the steward kind of wanted her to go and Emma very politely said, nope (She really was nice to her). so she then cantered that big beast of hers. And guys his canter is what she says it is. LOVE. SO nice. He really is a huge beast and he covers a lot of ground. He is very laid back but he is like watching a T Rex stride around (MUCH prettier than that though). It is funny, I think if Remus and I rode with Emma and Charlie, Charlie would have to circle every ten feet for us to keep up with him!! 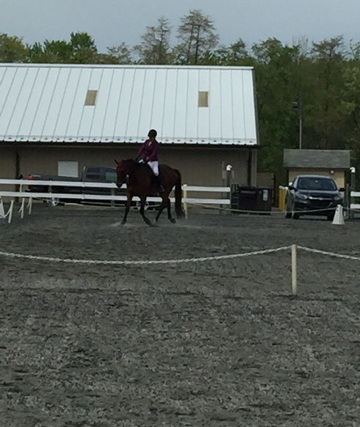 His test was by the grandstand (scary for Elementary in my opinion) but Charlie was NBD and just rocked it. He is very long-strided for that tiny arena. I think his test was better than he was scored for sure. He was pretty darn obedient and sure he missed some transitions (Or instead was late) but again LOOK at those legs. OH and look at that rocking color scheme going on. These guys got it going ON! :

As Emma walked out of the arena, I attempted to give Charlie his mint I had tried to give him before his test (Nope both times) and as I handed said soggy mint back to Emma , I ran off to Jess’s SUV to hop in and spin down Sawmill to watch SOME JUMPING!

Next blog post…..JUMPING FUN AT FAIR HILL (and no vomiting was done by me…YAY)