My new t-shirt arrived from https://teespring.com/stores/barn-dog-apparel!

The weather has been iffy all week. I have been farmsitting all week and am exhausted. Every other day it has rained. I haven’t ridden my horse since cc schooling on last Sunday. Oh and there is a Derby Cross tomorrow. That I am signed up for. But no dressage so that was a win. The good/bad news is that they were calling for rain again. A LOT OF IT.  Spoiler Alert #1: It rained its ass off early Sat morning but cleared by show time so it worked out.

On Friday, before going and doing barn duty again I went and walked the Derby Cross course to see what was what. I had to walk a million miles to find it after parking (Fair Hill is so huge) but find it I did. And I kind of walked in backwards so I found the higher numbered jumps first. And then proceeded to look for 1-8 and was puzzled when I could only find 9 and up. Then realized (BLOND MOMENT) that the 1-8 jumps were stadium. A Genius I am not. DUH!!!!!!!!!!!!!!

Overall, the course seemed okay. It was a lot of jumps for Remus (came to 18 i think with options). Which meant if I had any horse at all under me by fence 14-15, he would be loping if not trotting.

Some of the BN were so close in size to the Intro (you are allowed to jump whatever you want on CC) I was tempted to jump the bigger jumps. That was my thought on Friday (Spoiler # 2, it didn’t happen but we did jump all the intros, at least I didn’t wimp out and do elementary? Right?).

Anyway after the stadium you went thru about 10 more jumps and there were options after the ditch and the water andI knew I would do both of them as they will be in the starter trial next week. 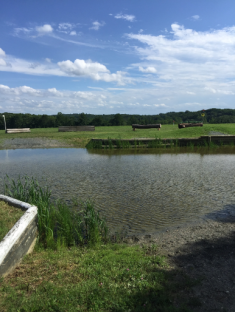 This sky at Fair Hill can be spectacular as I noticed in the photos I got. The water element was the last jump and the finish of the derby (so pretty isn’t it?). My jump is to the left of this water when you come out. You can see the white flag on it. You could jump any of the jumps after the water, the log to the right of mine was about the same size as mine (BN).

Also the ditch (baby) had a line to the hay feeder for intro. The beginner novice option was a hard right turn to a much larger feeder. If it hadnt been such a big turn with not a lot of time I may have done it (I did not)! The photo below shows the line to my jump (the baby ditch is barely noticeable to the left of the bigger ditch) as well as how baby this ditch it! It is a cute starter ditch though! And you can see the BN option and see how with the feeder (Intro) in the way there wasn’t a good line to it. A couple of my friends’ actually skipped it because they couldn’t get it right. If you did the baby ditch you kind of had to go to the intro feeder. Even if you did the bigger ditch it was a tight turn. 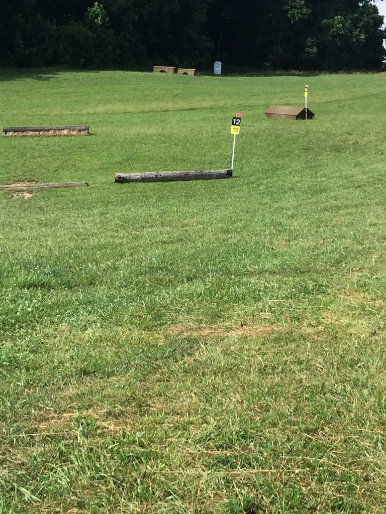 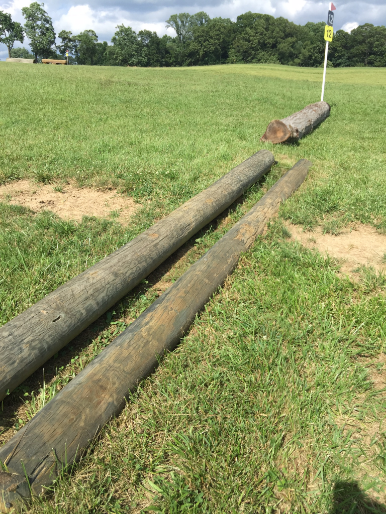 A few of the other jumps are below (I pale in comparison to Amanda’s course walk photos. But I got a few at least.. That big red table/ramp for Intro is finally not looking so big to me anymore. So that is a good thing I think?  Maybe?). 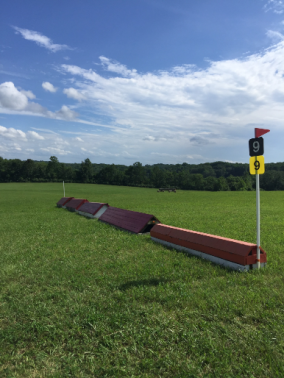 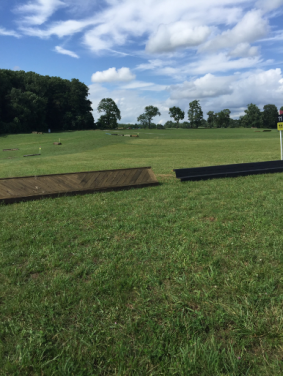 So overall, I left the course walk feeling one or two things. One, where could I vomit without anyone seeing me and two, how hot was it going to be or was it going to rain like it was calling for. I jumped in my truck heading to take care of horses and figured, eh we would wing it. Actually I really had no worries about anything except the hayfeeder after the ditch (ahem, full disclosure,  I fell off last year at the Derby at that one) and the train he jumped fine cross county schooling last week, but he literally leapt a bit over it like it was going to get him. But I felt okay about it all. Kind of…..if I am not worrying, well, we would all be worried then wouldn’t we?

4 thoughts on “The Fair Hill Derby Cross: Let’s Get Ready to Jump!”