Monday was a busy day in Remusland. He hitched a ride with Sterling to go to Unionville Equine to get his shots and his coggins updated (Sterling had gone to get some melanomas taken care of so I think Remus had the better visit)!

That place is gorgeous. Like I would live in the treatment area of this vet clinic. That nice. Remus came in with Sterling and stood there and watched them work on Sterling with a puzzled look on his face. (What they doing to Sterling? THEY aren’t going to do that TO ME are they??). 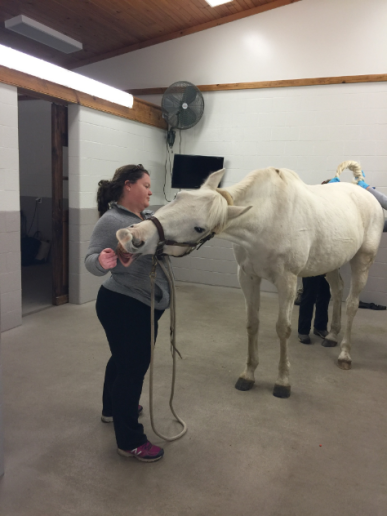 Then Dr. Mark came out and fussed over Remus (actually not one person who passed Remus in the aisle could resist stopping to fuss over him, Dr Mark actually told me if I let him go I might not get him back from some of those people. LOL). And Remus was like do you have cookies? And they did! He was good as gold for his shots and getting his coggins drawn and he is in good weight and looks great. We will keep an eye on his weight as we don’t want him losing any over the winter but he is just about perfect now. Not fat (though his big butt got in the way backing into his slot in the trailer..shhh) but not skinny. Fingers crossed he stays this way.

THEN he got clipped in the afternoon. Jess did the honors as I had to dash to work right after the vet and couldn’t get back in time. She bathed Remus at least partially and he was NOT IMPRESSED at all. If he could of I am pretty sure he would have given her the middle finger over that.

Then when they were clipping him, the good clippers broke so they had to break out the older (louder) clippers and Remus was STILL NOT impressed at all. But he was good. But by the time they were done, Jess couldn’t even get a decent picture of him. Remus was like EFF YOU LADY GO AWAY.

I haven’t seen him in person yet but hope it at least helps next time we ride with him getting less sweaty. I also texted Shawn (barn owner) to see if he was sore from his shots (He often has some kind of reaction) and she said (texting me back) well if he is it sure is not affecting his eating 🙂 HA.

Also, stirrup leather alert! My Lund stirrup leathers arrived and oh my goodness these are even better in person. WOW. I know that everyone said they were amazing but you know they were stirrup leathers. How amazing CAN they be? Well I love them and haven’t even gotten them on the saddle yet!! So soft and gorgeous.

14 thoughts on “A Shave & A Haircut, Vaccines Too”