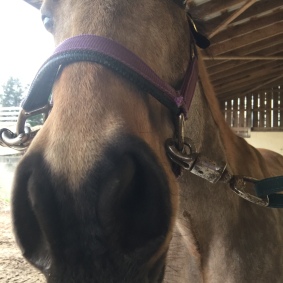 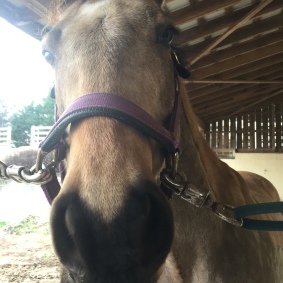 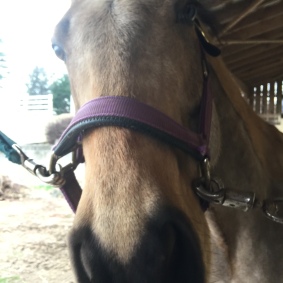 We got decent temps on Tuesday (low 40s!!) before a snowstorm was coming through on Wednesday so I cut out of work early Tuesday to go see my horse. I was toying with riding but the ring is still pretty chopped up and frozen in parts so Remus got a brushing and clip instead. And lots of treats. Because that is what he expects. Spoiled rotten horse. Plus once I was there my throat seized up and the coughing commenced again so probably was not a good idea to ride. But Remus at least got cleaned up a bit and looked better by the time I left. For some reason he lost one of his brand new purple bell boots so he was rocking the two tone color combo with one of his old black one and the other purple (I was too lazy to go look in the field, that will wait till this weekend when it is warmer). But dang horse how do you pull off a brand new bell boot? If he broke it I am going be so pissed!

His mane is atrocious and for some reason this year is poofed up (and he has rubbed a small part of it somehow, no hay feeder so Remus why must you do this shit to me?) See the red arrow below. THAT is where he has rubbed. You can barely tell because of the poofiness of his mane at this point. LOL and I think Remus has watched Henry’s instagram feed because he is working his own side eye mare glare right there isn’t he?

He also was a pill standing on the cross ties. He is usually pretty good so he was just irritated I brought him in and didn’t feed him his grain and then turned him back out because they don’t come up till 5 or so now that is staying lighter longer. Brat. Sometimes I just wonder why I put up with him.

I am keeping a close eye on his weight. He gets alfalfa at night in his night hay and I am pleased to see he is not gaining weight on it (But not losing weight). Last year this time he looked so much poorer so I am really happy. His coat while fuzzy is gleaming too. So I think whatever we are doing is right for him. I wish I was riding more but otherwise he is in good shape. This is one of the first times I could leave his blanket off for a bit so I could scrutinize him more AND could use the cross ties under the overhang so I had more light!

Speaking of riding, I rearranged my schedule so I can ride with Sally this weekend! Even though we haven’t ridden in FOREVER I feel like a lesson will be good considering A) the footing will be great at Kealani, and who knows when it will be good at our barn again and B) I need some bolstering that we can still jump (Hopefully we can LOL). And it is supposed to be around 50 on SATURDAY (last time Sally was here in early January it was single digits and I was sick in bed with flu so it has to be better, right??) I just have to hope I don’t start wheezing on course!

So Remus got his bridlepath trimmed and some of his yak facial hair and his front fetlocks. (I couldn’t reach his back ones and I was tired of coughing by then). So he looked a wee bit better. I re-blanketed him and turned him back out where he proceeded to do this. Brat!! Good thing he is cute (I even got a video of him stomping the ground like a wild mustang but the light was bad).

So I am pretty sure he is only here for the treats and it being winter does not faze him at all….cause less riding. more treats, more hay. OH YEAH. This morning I am on my couch on my laptop looking at it snow outside. Again. Spring are you coming?? Please??

13 thoughts on “Remus: All About the Treats”