So I finally got a lesson in. YAY. I rode, yay. My horse was a lazy ass (well not that bad but he was pretty  naughty one way cantering). He of course garnered LOADS OF FANS. (Like unreal the amount of people who fawn over him everywhere he goes.). 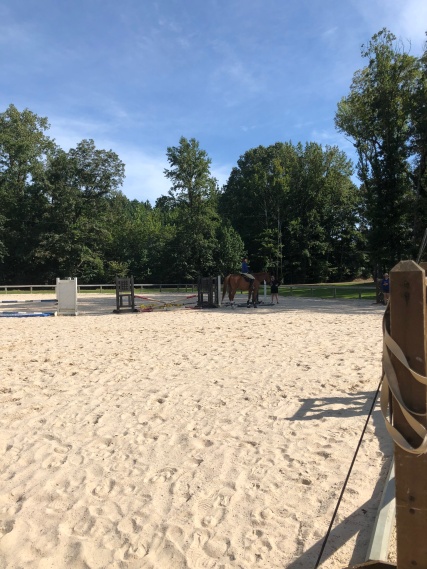 It was not pretty (no real media thank GOD) but we did it. We are both out of shape beyond belief. We hauled to the new place about 40 minutes away and Remus was just as chill about being in a new place as he is about eating his hay every night. That horse can be so laid back (and then not be as well) it can be a pleasure hauling him. Never whinnied even there were almost 30 horses at that barn. Never batted an eye at all the new stuff around. New ring. No prob. New jumps, no prob. He was just like yep here we go again. The ring was very nice and very big.

I liked the new instructor’s style. She right away wanted me to get Remus going from behind (every person I have ridden with wants this so it is good when it is not a huge difference from each place) and leave his face alone.  She was very laid back and casual and not stressing me out that I might not fit in. And hands up is not only said when Sally is around. Hmm, who knew? Anyway I liked her style and the other women who rode there were so friendly.  Everyone welcomed me. It was nice. Not snooty at all.

Again not pretty, but I will be going back next week for a lesson with a group. Remus would NOT canter the right way and was a shit with the bucking but she says we will get there. He did pop over a few cross rails which he did okay (me not so much). Work in progress, thy name is Michele and Remus!