Saturday, July 1, 2017 was the longest day ever!!  It was also a great, fun day due to good friends, new friends, and horses, jumps, and you name it. But two days later, I am still so bone weary it is not even funny.

One reason could be due to my logging over 28,000 steps on Saturday. Yes that is a lot of walking and is almost a half marathon. LOL WTF. And we got a ride down to CC to walk it just imagine if we had walked the trail down there (I did lead Remus back after CC so that was part of the steps). BUT STILL…feet, legs hurt..

Saturday dawned as the humid, hot day it promised to be. There was a breeze and it was actually cloudy while getting Remus loaded at the barn. But it was a hot hot day. Remus even drank water at the event (HE never drinks even though I haul water all the time for him..sigh…) but he did that day. Smart horse!

We pulled in about the same time as Emma and Janelle did. I had a hitchhiker come along for the ride. (He must have needed to go from Landenberg to Elkton and this was better than waiting for the bus HA).

After getting to the show grounds, I left Remus in the trailer while unpacking stuff and Alli popped by to say hi (I met her friend Kim later(another fabulous person, girlfriend is inspiring as Alli I am sure will share in her blog) and then I went to say hi to Emma and Janelle.  We represented all the colors of the rainbow there, we had a bay, a gray, a chestnut, another bay and a buckskin. We are equal opportunity color enthusiasts for sure! 🙂

I think it was so great having people you know riding with you. And we were all in about the same time periods so it just worked even better. Just more fun and lots of laughing commenced. But first we had to dressage. And dressage we did. If I haven’t mentioned it was hot as balls, it was. UGH. I brought my coat but ended up wearing just my new ROMFH show shirt (Which I LOVED). I looked like a beached whale in it (It is not flattering to us people with more lumps than others LOL) but it was comfy. And cool. And the magnet collar made it look so much more professional. I look forward to the Fall and wearing it under my tech’y coat.

Alli and Emma went by to go warm up and I was hot on their heels as I had not ridden much that week (newsflash, right?). When I got down to the warm up ring, I was shocked that it was not too much of zoo for once. It was not bad. And Remus warmed up fantastic. We had a nice stretchy walk, some good trots, and even his canters were on point. I stopped right there as I knew I was going to run out of horse if I pushed it.

Again the Kim story has to be shared by Alli, but I had a bit of a wait before my dressage slot (I was supposed to be right after Alli’s ride (which was fantastic, pony has some smoooth moves) but they had slotted Kim in between us. Kim also had a fantastic test!! A nice judge makes all the difference!!

I finally got to go in. I walked around so Remus could see the judge booth (sometimes these scare him) and then we trotted a bit. And still no bell. I am always terrified I am going to miss the bell/whistle/gong whatever. The judge then proceeded to ask me what test I was riding. I told her and she was like okay (there was a few confusions that day with tests, luckily not on my end!!) and then she rang the bell. FINALLY.

Now as a disclaimer this judge had to be pretty lenient. There were a lot of 20-30 scores in my division(we know Dino is a rock star but it is not usually that many 20’s in intro). I didn’t know that at the time but Remus nailed a 30.5 (his lowest ever) and got two 8.5’s on both his center line trots entering and ending the test. Saying that, they did feel pretty amazing. We had some bobbles but overall it was a very polite if not brilliant test. The judge even wrote: More activity needed! HA it is a fine line pushing Remus onward and upward and not getting a pissy pony. I need to push more I know but I am always lenient in the show ring. UGH. #goals

Even before knowing the score I was pretty happy with Remus. He paid attention to me in the ring, and didn’t buck in his canter transitions. I did get dinged trotting early after each canter (which for once I actually TRIED to extend it since I always do it early and never get dinged). This time I was dinged (this is what happens when you just think trot in your head with a lazy ass QH. He trots IMMEDIATELY. HA. Things to work on. Yeah).

But at least that was done. I went back to the trailer and untacked Remus (We had at least 3 plus hours before jumping, ugh long day, remember) and stuck him in his air conditioned trailer (I jest, I jest but seriously that Kingston is like 30 degrees cooler with both doors open. He just snoozes and nibbles hay and is more comfy than the rest of us).I also swapped my shirts and took my helmet off and popped my baseball hat on. It was time to course walk.

Emma had friends (Or someone had friends) with a truck not attached to an actual trailer. So they offered to haul us up to CC (So we all piled into the back of the truck).

And Emma read to us aloud her very own blog post from that day. I feel so special to have witnessed this. I think we all were rolling in the back of the truck laughing so hard. 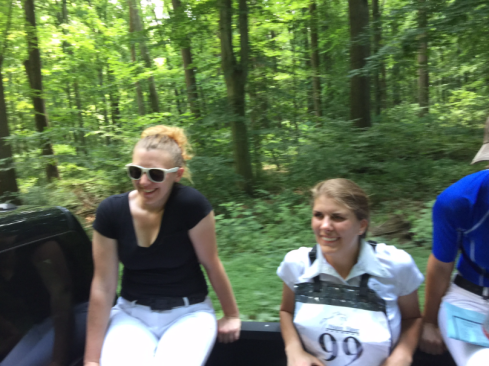 Once we got up to the courses, we split up as I went with Kim (and my friend Mary Beth) to direct Kim in her fifteen-minute course walk (thank goodness Kim has long legs!!) as she didn’t have as much leisurely time as we did! We did a condensed walk and then Kim had already split to get her horse so Mary Beth gave me a ride up to the trailers again. (I am sorry I missed Emma and Janelle and Alli course walks. NEXT TIME FOR SURE).

There we sat and shot the breeze wasting time till I realized time was definitely moving and I might have to get ready soon…I unloaded Remus. He really didn’t want to come back out but he did, we tacked him up (Thanks Tanya for your help!) and I got changed and zipped the dreaded vest up. UGH….and then the helmet and then. I felt just like this:

I was running out of time so hopped aboard and took off at a trot telling Tanya to take my gloves with her. And off we went to ride the trail up to CC. (Which is a hike!).

Stay tuned for the next installment of As the World Melts. Jumping (Stadium and CC) post to come next!!