My favorite shows ever were the Morgan Breed shows we went to when we were kids. It was usually about 10-15 of us with parents, siblings and so on. We went for 3-5 days depending on where the show was, we (as poor riding people) stayed in a stall (four or five kids on straw bales every which way) and literally lived at the fair grounds.

Timonium was great, so was Harrington, we even went up to Massachusetts once for a show. We did everything as cheap as possible so the only real time we got a hotel room was at Richmond where I ended up in the hospital so maybe that says something. LOL.

But the prep for the shows were almost as exciting as the actual shows. Packing enough hay, straw (Or shavings), all the tack, grain, grooming supplies, blankets, sheets, oh our show clothes don’t forget that (I forgot my girth once, not too shabby for all we had to remember).

And once we were at the shows we were responsible for our own horses, feeding, watering etc. Cleaning stalls etc. It was so much fun. And then we got to show. My friend Betsy had a really nice mare Mrs B had bred (her name was Unique and she was that!) and she usually won so it was great fun to be able to run out when Betsy won, to help groom to get the photos. Me I didn’t win much but I did enjoy showing.

We did it all on our homebred, backyard Morgans: Western, English, Saddle Seat, Hunt Seat, Driving, Trail you name it. Night classes were the most fun. The lights were on and the organ music was playing and I swear to this day if I hear organ music I get that tingle of anticipation a class at a horse show always gives me. So funny.

There was a costume class one year at Timonium and I came up with the idea of Wizard of Oz. We planned it so well  (I was the witch) and when I went to get Pasha he was HORRIFIED and would not let me get on (I had the big hat on and my whole skin was green from makeup he was like NOPE). So my friend Pat put me up on Sam her big ass Morgan hunter (He was over 16 hand and not saddlebred like more massive) here i was on this thing BAREBACK with a witch’s hat on. So MUCH fun. 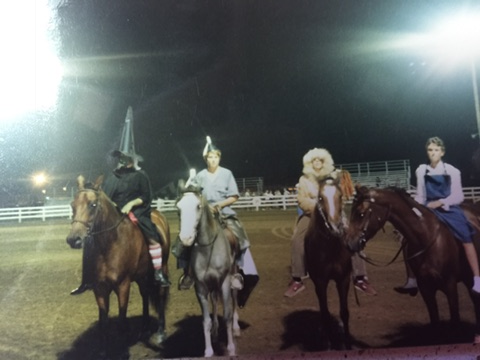 Just writing about those days makes me smile. We just had a blast. Always