But I have mentioned a few times to The Everything Pony and Patently Bay before about my dachshie addiction. We have had a couple dachshunds (we don’t have any right now, so sad) and we even fostered for awhile. I still have a habit of collecting dachshund themed items though (this could be a whole post of all my items but I will just share a couple!).

For those of you inclined to hoard (I mean, collect) dachshund (or any dog-themed) stuff take a look at my shower curtain and bathmat from Overstock. (I also have the down comforter from them too so yes I have a problem! HA) But isn’t that pattern adorable?

I also thought I would share the dachshunds we have loved too. Cause dogs. NO ONE minds seeing doggie photos right? I have been casually looking for another schnauzer (we have one now (Gretchen) along with Ollie (we adopted both of them) and have had 3 others) but I would totally do another dachshund instead but the last one we had had back issues and I don’t know if I can do that again. But they are the cutest!!

First off, we had a rescue dachshund named Helmet that we fostered (failed) and took to Texas with us when we moved there due to no one wanting a 13 year dachsie with heart failure (we loved him and he lived with us in Texas til Mark came home to the farm one day and found him dead on his doggie bed). Here he is on his own and also with Peeves our manx cat we got at the Taylor Horse Sale in Texas (Still have the damn cat 13-14 years later). 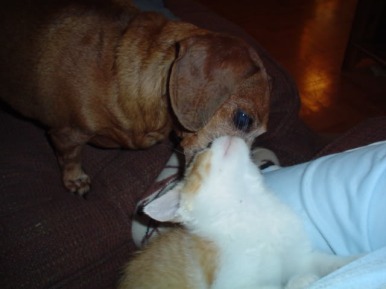 Not a dachshund but had to share this is one of our schnauzers (Max who we lost a few years back way too young with lymphoma) with Peeves too!

Then we got Pippin (also from Taylor but I didn’t get him after too many Coors Lights at a horse sale(unlike the cat!).

Here is Pip with Max and also a couple photos of him when I took him to work and he slept in the file drawer and on the trip back from Texas when we moved back. Photogenic beast wasn’t he? 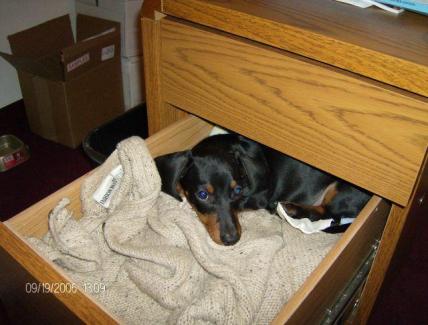 Pippin had back issues several times and due to his health issues we had to put him to sleep rather than have him suffer. I still miss him. Ollie reminds me a lot of him in some ways though I don’t think Ollie has any dachshund in him. But he has the mischievous streak they all seem to have.

My dad also had a dachshund named Fritz but I cannot find any photos of him at this time for some reason. I know I have them! He was a red dachshund like Helmet and he lived to a ripe old age of 15. We just lost him about 2 years ago. I just love going through all the old photos looking and reminiscing about times past. Just a sentimental sap here.

Do you look back at the dogs you have had and miss them or start thinking about getting another one? Awww dogs. They are such amazing creatures aren’t they? (I have two beside me on the couch snoring away as I type). And do you have a tendency to buy stuff just because it has a dachshund (or a pug or corgi or  beagle or whatever) on it? Tell me I am NOT alone!