Things never seem to go to plan lately. Schnauzer Saturday or Sunday didn’t happen just because we were so busy. And sometimes I just wonder what it would be like some days to have my horse at a boarding barn so the actual riding COULD happen? Yeah that is what I dream about some nights. Like I LOVE having him outside my back door but would love to teleport him to a barn with a nice ring at least twice a week. Come on SCIENCE catch up!

I would also like Tennessee to cooperate in some tiny way toward the possiblity of actually riding my horse if not at home at least off the farm. Torrential rain, yep last Wed-Friday….then when it stopped raining finally (some areas around us got over 5 inches in one day!) the humidity creeped(NO, NOT CREEPED, LEAPED!) back in.  The horse flies have also returned here at home, they aren’t as bad as before but are still making my horse bloody if he is outside (though the rest of the normal flies are pretty much nonexistent? Go figure.)

I was supposed to have a lesson this weekend but between the rain leaving flooding and the heat/humidity that didn’t happen. I didn’t even want to haul him it was that hot with no air flow at all. Even my trailer as ventilated as it is, it is hot air blowing in as you drive down the highway. Fingers crossed I get another one on the schedule this week in the late evening. The temps aren’t that high but the humidity puts the heat index into the 110 margins. So hot enough to fry an egg probably!

We mowed grass all Saturday morning and the heat sucked the life out of me the rest of the day. Then yesterday evening we hung another gate down the drive so I don’t have to walk so far to put Remus out in the front field (Or drive so far in the side by side). Speaking of that fun little vehicle I managed to smash the top of my hand (right under where the knuckles start) against a post while driving through a gate. Don’t ask but it hurt mightily. I thought I broke something it was so swollen but it is better now but don’t touch it thanks!! HA. I am an idiot. I may have said some cuss words as well. It was one of those stupid why did I do that things.

I seem to do a lot of them lately, I have bruises I have no idea where I get them from. The heat just makes you a zombie at times.  But even though it was hot we still kept busy doing farm things.  Remus maybe gets out a couple hours in the evening or in the am depending on bugs but is mostly indoors lately. Sounds like we might get a wee break later this week fingers crossed. I have SO MUCH grass and not enough horses (or horse) eating it!

So now it is Monday. I feel the same as my dogs about Monday. They spend a lot of time cooling out in the ac (which is working now! Finally!). I hope everyone had better riding weekends than I did.  I know Emily did! #sojealous #canimovetoKY #toohottowalklateralonejumporcanter! 🙂 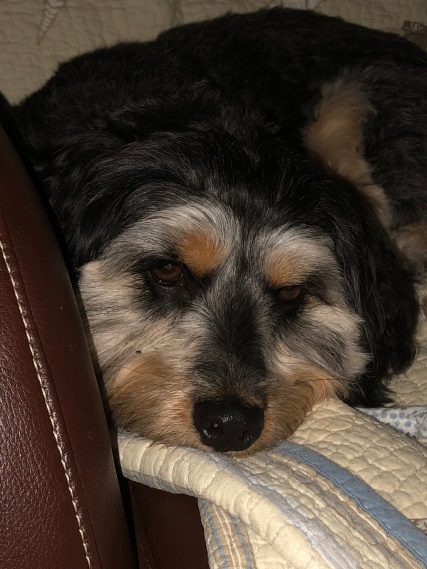 20 thoughts on “Sometimes I Just Wonder”