Remus enjoyed his stay at Summer Camp. The last few days he spent inside there in front of his fan due to a loosened shoe (THAT IS STILL ON TODAY SOMEHOW??).  Now he is not adverse to standing inside in front of a fan BUT he also likes his grass. As I unloaded him off the trailer on Friday evening, he almost ripped my arm off getting to the grass in the yard. Umm, not starving fellow!

He has settled back into his normal routine. The nice thing is I can let him out around 7-730 pm not 930 at night due to the flies being so much better (there are still some of the bomber horse flies around that get him but at least not as bad). He has also manage to leap and canter around some (AKA when the dogs bark or some shit that sets him off) and still kept his shoe on. Miracle? I am hoping my farrier comes tomorrow like he promised last week.

I let him in the front field the first full night he was back. AND HE RAN AWAY FROM ME when I tried to bring him up (SEE BUGS are better usually he runs to the gate). So me and Ollie had to go take the side by side out in field to catch him (He still tried to run away but I caught him with the dog leash and in my panic put his halter on backwards. So sue me at least I caught him). Doesn’t he look offended? Brat. I didn’t want him out all night on that pasture. Since then I haven’t let him back out there until his shoe is fixed.

His foot looks bad. His crack has expanded and I hope my farrier can fix it so it stays on. UGH. He may have been reading the Mania in the Middle blog.  I must not let P influence Remus in his life choices HA! 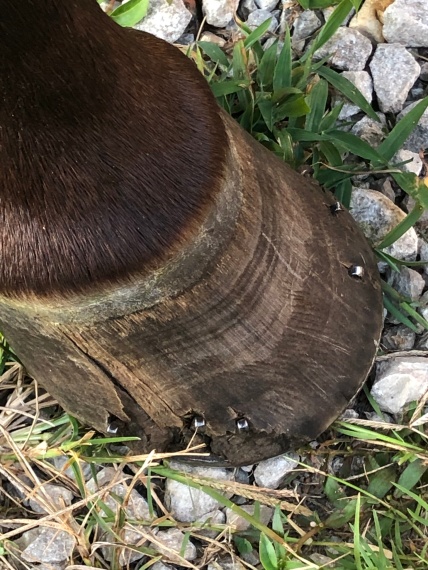 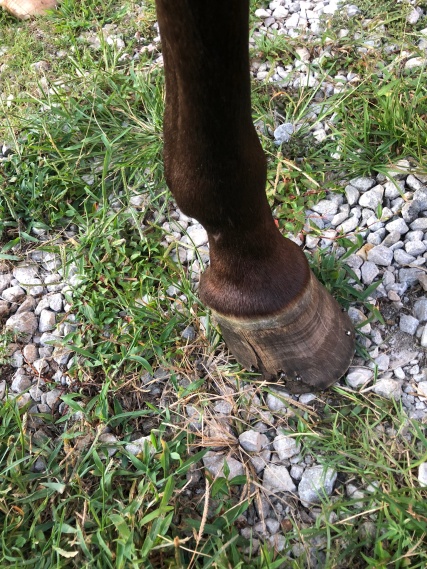 Remus also lost no weight at Summer Camp. If anything he gained some. Oh Remus. Once he gets his feet done I hope to haul out to get a lesson in this week. Fat Buckskin needs some riding stat. I have someone coming to cut the tall grass in the front field for me again (yes I have a tractor but with that terrain it is better to pay someone for that, here’s hoping he doesnt get in the pond again HA!). Once that is cut and if it stays cool in the am I should be able to start hacking up there again. Lots of plans. Things could go crazy in an instant but for now I am wishing and hoping!

And last but least, I got more hay for the fat boy. I was so pleased the hay guy texted me and I was able to go get 30 bales this weekend. He should have two more cuttings and I hope to get a bit more but right now my storage area is at full capacity. I don’t feed Remus a lot of this alfalfa so it lasts a while. I have tarps on it now to get the moths off it (and have strategically hung moth ball bags around the barn, ridiculous these moths! UGH). It is gorgeous hay and I got a great deal buying it out of the field.

Remus is a lucky horse. Workload is insane right now so back to work I go. Hope everyone had a great weekend and welcome to Monday (groan).