I swear I blogged…wait it was a week ago? I have no idea where those days went. Hmm…anyway catch up time!! Buckle up friends it is a long one!

I had a lesson on Wednesday and it was nice and cool and it was a great lesson. We worked on some combinations and keeping Remus forward. I can’t remember much more. HA. It must not have been that remarkable but sometimes that is good. I tried Poppy’s saddle (Luc Childeric) and while comfy the tree did NOT fit Remus at all and it slid back a lot. But it is food for thought in my quest for a saddle. See photos of Luc Childeric on him below and above is the Antares (another instructor’s saddle) which definitely fits him much better! Yes I am officially a saddle ho. As if you guys didn’t know that already! 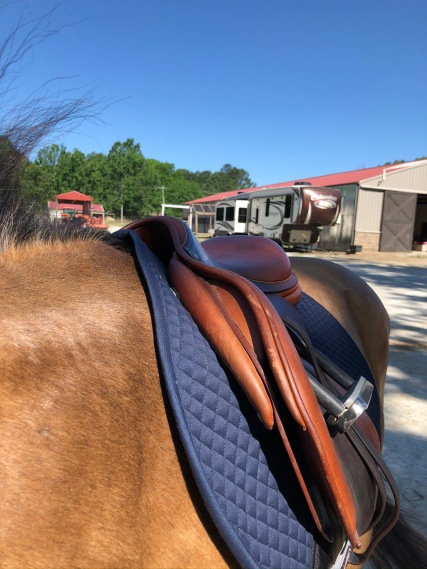 Then we had a clinic yesterday. Note when I signed up it was forecast to be 75 and delightful. Tennessee, it was not delightful. It was 90 in the shade and the humidity while not horrible was still around. Along with the brutal Tennessee sun. UGH. Our ride time was 2:30. This did not bode well. I will say the venue was perfect and the restrictions in place (screening as you came in, social distancing as much as possible and so on) were well done. It was a pleasure going there. Except it was hot.

But it was an amazing lesson. I enjoyed it so much. Hilda was a delight. She also reminded me in her voice of Moira Rose so I was like this is amazing I am taking a lesson from Moira (okay she wasn’t that bad but her enunciation was perfect and had me giggling at times!!). Hilda is coming back to this same venue in September and I was like I will sign up now!! It was that good.

She first chatted with us to find out what we wanted to work on and about our horses, etc. I was paired with a really nice teenager rider (Cassidy, who is a wonderful rider)with an adorable POA pony named Oakley and the first thing Hilda said ohhhh horses that aren’t bay!

We started out on a trot circle and went over some poles. This sounds mundane but it was not. It really struck a cord with me. She had us count the trot steps out loud as we went over the poles. Remus did it correctly the first way and then other way he kind of miffed it up. She was like well we can tell which is his good way. Oakley the POA moves like Remus (very on the forehand) so she worked with her a bit to get her up off the forehand and she ended up doing great on that task too.

Then we did the same exercise on the circle at the canter. I was a tiny bit worried and told Hilda that canter is not our strong suit and so on. So she said go canter. And I moved my outside leg back and Remus literally didn’t take one step and he was cantering. She was like oh yeah I see what you mean (sarcasm is great!) He really was perfect. We had to work a bit on our striding but it was so great breaking it down to that low level to make you think. By doing that I didn’t freeze up and actually rode. So it was a great exercise I plan to use at Trinity as well.

Then we started a grid. It was a cross rail then a bounce pole then another pole which was a bit farther away (I think 3 strides but don’t hold me to that). We had to trot in the crossrail and canter the poles. That was easier than I thought to do for some reason. Then we raised the fence a bit and when we came out of the grid we had to shout which lead we landed in and which way we were going (AKA RIGHT or LEFT). And then we circled that way at the canter. Then we did the grid and continued on to the other small jumps on each side.

The ring was set up on a small dressage court so let me just tell you how tight it was. IT WAS TIGHT. All the jumps were on an angle on each side of the grid. We did the grid and added a couple more fences including a bounce pole on a slice. Which went fine.

It was SO MUCH FUN. Except for the skinny. There was a skinny vertical (not tall at all) and we sucked so much at that. Hilda got me to wait and not push but it still wasnt pretty but after a few tries she was like let’s leave that. I got to watch Oakley do the grid with a big oxer too. I was going to do that exercise but ended up skipping it because. Guess what? We got to do CROSS COUNTRY!! OMG. I didn’t have a vest but someone was kind enough to lend me a larger one (must order one!).

Let me back up a bit. When I unloaded Remus off the trailer and he saw the cross country course he grew to 17 hands. I shit you not. He was SO EXCITED! So  I was so glad we got to do a little of that. We were running out of time but we did up one hill over two poles set about 18 inches just to get an idea. Then we popped over some logs first at a trot and then at a canter. Remus ate it all up with a spoon. He was so happy!. We didn’t do too much due to heat and being just about done but OMG WE GOT TO GO CROSS COUNTRY. 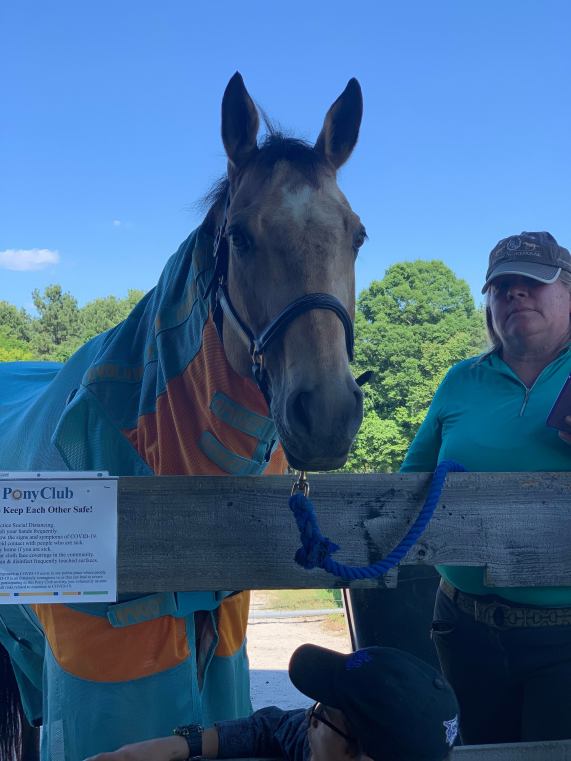 It was a great clinic. We were done so I got off and drank ten gallons of water, stripped Remus down, hosed him off, and threw his fly sheet on. We now were in spectator mode. Steph my friend who so kindly hauled me there had her lesson next and they were four (Or five I am fuzzy today) in that lesson. They were doing larger jumps but did essentially the same exercises. Then they went out in the other side of the cross country field and those jumps were damn huge. Yeah. I tried to video Steph but Remus was pigging out on grass and yanking me all over hell and creation. If you want a laugh please watch this video I attempted for Steph and her lovely mare CC and how Remus made me FAIL! Maybe next time I will leave him in the trailer….you have to listen to this one with the video on! Steph had a great ride on CC. She is a lot braver than me! 🙂

Anyway what an amazing day. I was so tired but it was so worth it!! And I do kind of love that big buckskin of mine. What a champ! And now it is Monday? Why? I need a Sunday to get over my Sunday. I bet Remus slept as heavy as I did last night. I still need a nap!

I hope I get a few more photos and will post when I do but wanted to share what I did  have and my experience with this clinic. So much fun and such a great venue! And within 25 minutes of where Remus boards! YES!

13 thoughts on “Where Did That Week Go? Lesson and Clinic Recap”